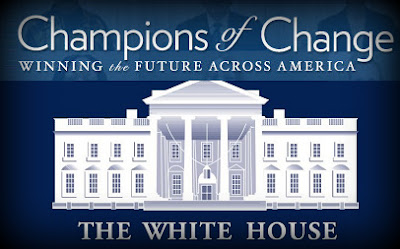 "I think we need to be really mindful. This is not only historic, all of us in this room, but this is divine intervention at its most astonishing. I am of a generation where this would not only be impossible but illegal." 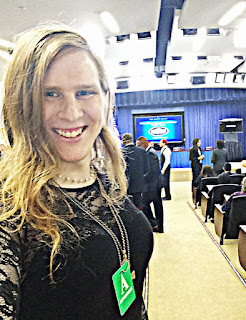 On Nov 23rd, 2015, I attended the White Houses's event honoring the Transgender Day of Remembrance and LGBT Champions of Change in the arts. I was contacted earlier in the month with the invite in recognition of my scholarship, particularly my work with Transliterature andTransform Talks. Despite numerous official documents being sent my way, it was not until I passed through the second of two security check-points, twice body-scanned, and twice interviewed that I began to believe that the White House was really allowing me - even inviting me - to enter. The security guards gave me a green pass-card with the letter "A" emblazoned on it in white. The card had a metallic chain that allowed it to hang around my neck so everyone could see at a glance whether or not I was welcome inside our national locum sanctum. As a transgender woman, I often am made to feel unwelcome in many places but here, today, this green card was an affirmation that I am accepted at the White House. I was invited to attend the national transgender day of remembrance and to celebrate those LGBTQI Champions of Change working in the arts. Until recently, this meeting would be unthinkable. It was not until 2015 that the word "transgender" was even spoken publicly by a U.S. president, much less would there be an event at the White House with the word prominently posted on it and named as the target demographic of those invited, remembered, and honored. This meeting was one powerful sign that the "Change" President Obama promised back in the 2008 election is underway. The change was not complete. Nor was the change embodied in a single candidate. Rather, change was being invited to the White House. It was brought in the present collection of activists and artists.

Ahead of me in line to enter the White House was members of the cast from Amazon's Transparent. The crowds shifted and I lost sight of them, unable to make out particular persons as we were shepherded down hallways and through locked doors. I began to fall back, not wanting to wander the halls of the chief executive building alone, I mingled in with those who were the next in the door. Behind me, I gathered, were producers of the Danish Girl. Only later would I come to realize how intermeshed the creative talents are making these groundbreaking pieces of transgender media. The drive to reclaim transgender stories and tell the untold histories brings together film and TV makers to share resources, struggles, and successes. With goals beyond merely entertaining an audience or profiting a production company, people are eager and willing to work with anyone who can help further transgender discourse and justice. I learned all this in our conversations on upcoming media and scholarship. I also learned this as we burst through a door into a coat-check area and I almost fell right into Jeffrey Tambor, the lead actor of Transparent (2014-), a show on Amazon Prime based on the true life story of a trans parent who transitioned later in life and her family's reactions. As soon as I walked in and found an empty space to stand, he acknowledged those I had entered with as colleagues and then came over to me. Hand extended, he said, "Hello, my name is Jeffrey. Honored to meet you!" In the discussions and meetings to follow, the openness to affirm and collaborate with the work of those present was evident. 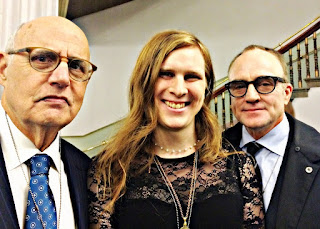 With Jeffrey Tambor, I discussed family. As the lead in Transparent, Tambor plays Maura Pfefferman, a transgender woman who transitions late in her life after having three children, who call her Moppa. The show is not only about Maura but rather - as my own mother has observed - more about her family as they experience the transition together. Transparent understands that no trans person's experiences, no life, occurs in complete isolation. Even the points of conflict and separation demarcate another place our lives take shape. We become like life-sized statues, brought into shape both by what is preserved (highlighted) and what is removed. Tambor's family lives in New York and is awaiting the upcoming winter. He asks about my family. I tell him about my partner and our two young girls. We talk about the difficulty in raising children who recognize and value their queer, trans family in a world that does not reflect their lives back to them. Art is often more of a mirror than a window and raising children with so few representations on TV or in the movies that allow them to reflect back on the particularity of their family can be difficult. This is one reason queer, femme, trans, crip, people of color are often better at creativity and understanding metaphors in literature, I often say. We know the world is not built for us and does not tell our story, so we must always translate things for our own use and contemplation. In this way, the lives of children with a trans parent at once suffer a loss but also gain an acute power that will allow them to better understand and transform the world around them. At the end of our conversation, after I shared about the girls, my voice was cracking. Stepping forward, embracing me, Moppa gave me a big hug.

In another moment, I got to have a conversation walking down the halls of the White House with Bradley Whitford about transgender politics and the history. Whitford is well known for these "walk-and-talks" from his role, Josh Lyman on the West Wing. But today the discussion progressed through a shared interest in the erased pre- and early modern history of transgender. "This is nothing new," Whitford said. "I just saw a great production of Twelfth Night and I kept on thinking, 'this is nothing new.'" That is interesting, I replied. I pointed out that Shakespeare not only imagines those assigned women bucking the system to live as men, but specifically had Viola call themselves Cesario, "an eunuch." Shakespeare's London was no stranger to trans and non-binary genders. Castrate and effeminate boys were a staple of the London theater, playing primarily female roles. Then again, there were the trans masculine figures of London, such as Moll "Cutpurse" Frith, a local personality featured numerous times in London Comedies and in a personal biography. But in creating roles such as Cesario, Shakespeare pointed to the many trans masculine personas that filled his world and creative environment. Eunuchs and other castrates, while different than current day trans women or men, constituted a unique gender - physically, socially, legally, and theologically. "This is nothing new," I agreed with Whitford. In so many ways, what we do on this day in the White House is not the forging of a new path but the remembering of an old, long, hard fought road. 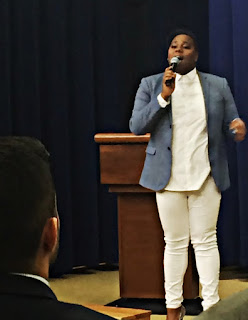 After an hour of coffee and mingling, the official event began as the group filed into seats for a series of panels where guest speakers recounted the histories, literature (including film and TV), and activism currently being explored in LGBTQI politics. While the panels were framed by official and mainstream projects, including a beautiful rendition of the National Anthem by Alex Newell who played the transgender woman of color, Unique, on Glee, nonetheless, the content of the event pushed radical and intersectional social justice agendas. Among the most radical calls for justice was a thread that ran throughout the day on reparations for oppressed minorities. The discussion began, as it should, with the still pressing need for reparations for African-Americans to further the realignment of society after the nation's violent history of chattel slavery. The White House continues to stand as one of the countless American institutions built on the backs of slaves who are yet to be properly compensated for generations of exploited labor and abuse. Echoing a theme of the event, social justice demands more than representational concessions but seismic structural reforms that forever changes the map of cultural powers in the country. It is not enough to affirm, like, or speak support for #blacklivesmatter. Rather, society needs to shake ups in police protocols, hiring practices, and cultural orientations. The White House's Raffi Freedman-Gurspan, a transgender woman of color recently hired to direct outreach and recruitment for the Office of Presidential Personnel, noted the ways the White House affirms the call for systematic changes through strategic hires and training for members from across marginalized communities.

During my conversations with the cast and production staff of Transparent and the Danish Girl I was thrilled to discover that the production team for Transparent aimed to further the penetration and integration of trans creative workers into the TV and film industry by designating that at least 20% of their hires would be from the transgender community. This included writers, actors, and producers but also technicians, set builders, lighting experts, and assistants. "Many trans people have a desire to work in film but aren't given the entry level or advancement opportunities required to make a living in the industry," said one of the producers. "That is why we make it a point to hire, train, and promote trans talents. We want to make sure that they leave our production team with experience that will serve them as they continue on in their careers." This is the sentiment of artists and activists who understand that social justice is not just about changing narratives and representations but the systematic structures that determine what bodies are allowed to succeed financially, socially, or politically. Each of the speakers for Transparent and the Danish Girl echoed the intersectional and systematic calls for justice of the other speakers. Throughout the day, the LGBT Champions for Change demonstrated that society will never be able to fully affirm #translivesmatter without also affirming #blacklivesmatter, without crip allies, without intersex siblings, without straight, cisgender, white women, without men of privilege stepping from secure places of authority to redirect their power towards collective justice. Change is antithetical to polite politics as usual. Change means that the safe and familiar may have to pass away in order for a better world to be forged from the remains. 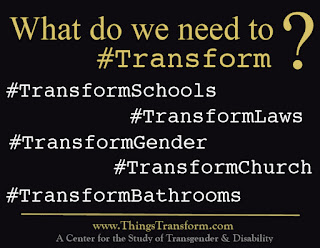