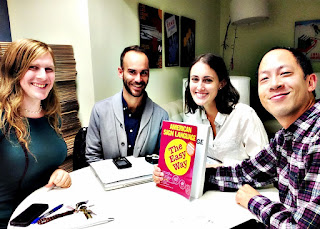 
On Wednesday, November 18th, 2:30 to 4:30 PM the MATCH Crip/Queer Working Group held a workshop on American Sign Language (ASL) as part of its initiative to increase familiarity with non-verbal forms of communication. The event was led by Samuel Yates and M.W. Bychowski.

The event began with a brief history of how ASL evolved from the French Sign Language system (which used two hands instead of the one handed English model) before it was brought to the United States as part of a new education initiative. The advantages of ASL included the ability to allow members of the Deaf community to communicate with one another while previous models focused on lip-reading, a process which privileges the hearing as the active user of language and the Deaf as the passive recipient. We discussed Deaf and signing culture, the development of local signs and the creation of artistic practices such as Yale's ASL Shakespeare Project.

Next we learned how to sign letters and some basic words. Each of us learned how to spell our names and introduce ourselves: hello, my name is ______. We learned about the role of facial expressions to punctuate and modify signs. Among the signing etiquette we discussed was the how simulcomming can put the emphasis on the language of the hearing, modifying ASL fit into spoken English and breaking the grammatical rules of signing. In the end, we looked through various options for learning more about ASL through college courses, summer intensive language programs, online tools, text-books, and even smart-phone apps. However each of us moved on from the workshop, however, we all gained a better appreciation of the valuable culture of ASL.