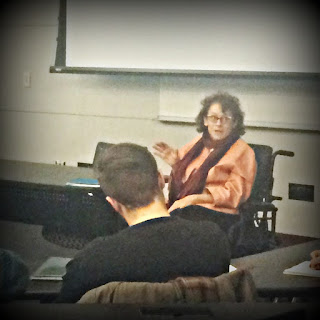 "What passes for disability representation in the arts
is instead mostly fantasy about us."

On Dec 3rd, Simi Linton spoke to a collection of several classes, as well as faculty and students in GWU's Crip/Queer Studies contingent. Her remarks, which she entitled, "Cultural Territories of Disability," took on the form of a seminar style dialog with the audience. Over the hour and a half, she examined the history and current contexts of disability in the public, the role of disability arts in democracy, and engaged students with a screening of some of her films that illustrate the lived affects art has on people with a diversity of embodiments. Professor David Mitchell introduced Linton and explained that her work has already been an influential part of his course which was now in its final weeks. Indeed, the event was a special treat for students who were able to receive a clarification and continuation of thoughts they had been stewing on all semester.

At the start of her talk, Linton explained how her first book came out of a dinner at a restaurant with the desire to portray disability as an active mode of embodying the self and society rather than a passive state. As a discerning period, Linton decided that working in the academy would put too many limitations on her time, work, and conversations. In the end, she decided to leave the ivory tower of teaching, "to bring disability into the public" and use the arts to reorient societal orientations, "the cultural authority of disability." Disability justice requires mass participation in order to transform the physical and societal environments that disable those with non-normative embodiments. As Linton brought the audience into the conversation on disability culture, she spurred competition between classes in order to get a diversity of vantage points and to push the attending classes to see crip cultural authority as a good worth fighting to develop.
__________________________________________________